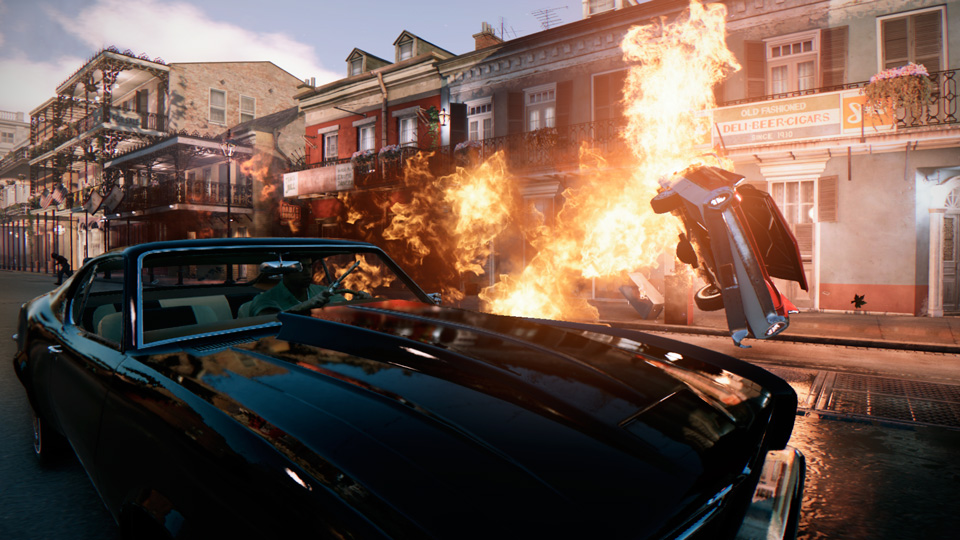 Apparently training you to dismantle a complex organized crime network and wreaking havoc on your enemies. Developed by Hanger 13 and Published by 2K Games Mafia, a franchise which has seen us become “made men” twice now, is turning the tables. Players will now be stepping into the boots of returning Vietnam Vet Lincoln Clay and leading a diverse group of disenfranchised protagonists to destroy the Italian Mob. It is more than a simple revenge plot as a rich narrative draws you in and makes you invested in building your own network. The combat system lacks finesse, but aggressive enemies make it a challenge and visceral kills make it fun.

Mafia 3 is set in the fictional city of New Bordeaux, based on New Orleans, in 1968. The story pulls heavily on the real history of turbulence from the period including civil rights, the fear of communism, and the political fallout from events such as the rise of Castro and Vietnam War. This allows Hanger 13 to craft a tragic tale that feels genuine with themes that still echo today even when they are packaged in an open-world murder simulator. The immersive story is the star of Mafia 3 and it will keep you invested, even in those repetitive contraband runs, right to the end. Fair warning though: The easily offended need not apply.

Graphic violence, betrayal, racism, sex trafficking, war crimes, drug abuse, and all that just in the first act. Mature Content doesn’t really cover Mafia 3. Few games could rival the content here. What makes the topics in Mafia 3 truly horrific is that they are treated with the seriousness of a turbulent period the game is set. The game uses slurs and profanity liberally although only to story and its setting.

Even so, those easily offended will find it hard to stomach. While video games do offer a kind of hyperbole to violence, the world of Mafia 3 feels real and therefore disturbing. This is a work of fiction but the narrative is delivered with a sense of authenticity that stems from history. The story plays deeply into the civil discord of the late 60s with a number of themes still being very relatable today. Every character has a rich backstory that supports their attitudes and demeanor. Themes are carried not only in the core missions but also bypassing NPCs. The entire world feels the weight of the rival gangs, socially and economically, in New Bordeaux. 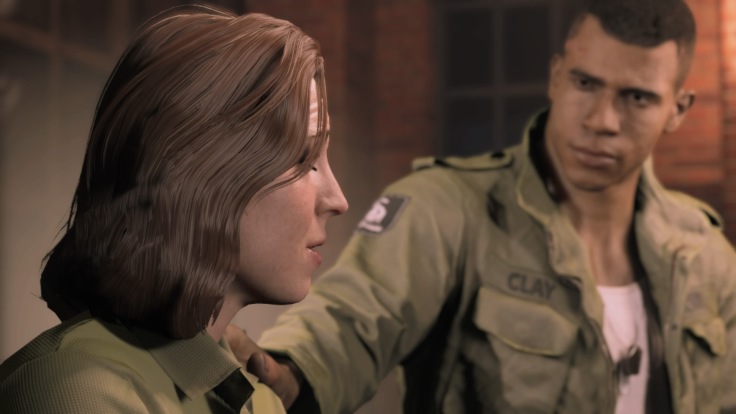 The narrative of Mafia 3 is powerful and gets players invested early. This is partly because it is presented in a very effective manner. The story is being told in two ways. First, retroactively via a CSPAN style congressional hearing and documentary interviews. A retired FBI agent recounts the story of Lincoln Clay’s path of destruction and the fall of Sal Marcano. This provides an interesting view of events as it is not complete itself but frames the player’s actions as a significant part of the city’s history. You are not simply following some pointless revenge plot you are part of something much larger.

The second method is in real time through gameplay and cutscenes. You follow Lincoln Clay as a Vietnam veteran who returns home only to have his world destroyed by the Italian mob. Lincoln is the only survivor of Marcano’s betrayal and sets out to destroy him. In order to do this Lincoln must collect other individuals who have been equally scorned by Marcano and convince them to unite to destabilize their common enemy. Each of your compatriots has a detailed story and offer meaningful interactions both to move the story forward and to build an emotional connection with the player. Seeing the story told two ways helps keep players invested by creating a connection to the characters and reinforcing the significance of every mob boss you “retire”.

The strategy for Lincoln’s hostile takeover of New Bordeaux is to undermine his enemies. Taking back territory by weakening the control of mob lieutenants. You will do this in several ways but it ultimately boils down to three types of mission. Interrogate key members of the mob to gain intel, kill key persons, or destroy resources. Once you have hit them where it hurts, that is the wallet, you will be giving the opportunity take out the Racket runners and eventually the lieutenants themselves.

It is a typical rinse and repeat formula for open world games but its driving force is the game’s story. The grind doesn’t feel like much of a grind because narrative works well to get you as invested in this tale of revenge as Lincoln is. You’ll find yourself running around to collect your dues and make your contraband deliveries to learn more about each of the unique characters and move the story forward. You will also begin building your own empire with the gang of undesirables you have collected.

Once you begin seizing parts of New Bordeaux from Marcano you will be given the chance to assign those parts to your own lieutenants. Building your own family is a neat mechanic that has serious gameplay consequences. Assigning rackets and new territories can unlock boosts and resources for Lincoln but it may mean tough choices. Choosing one boss over the other can cost you access to some resources. Although there are a lot of strategic reasons to choose who runs what, there is also a deeply personal element. Mafia 3 has created characters you can connect to on a personal level. That doesn’t necessarily mean like, mind you.

The combat in Mafia 3 is not original, but can be very satisfying. The destructible cover system and aggressive enemies add an urgency to a firefight. There is a fair selection of weapons, although you will only be able to carry two at a time. The gunplay is fairly basic but the audio and animations when taking out enemies are quite satisfying. Mafia III features a surprising number of takedown and kill animations. Seriously, there are a lot of ways for people to die in this game. There is a visceral feeling to killing, both in melee takedowns and with guns, that makes it fun. Moving between cover is not as natural as in some shooters, but it works well enough to maintain the flow of a fight. You will have to keep moving as enemies will rush and flank Lincoln if you don’t keep track of them. 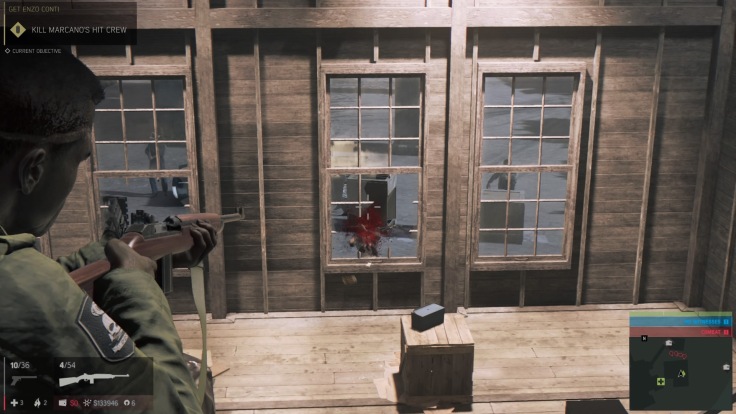 There is the opportunity for stealth, complete with a cover system and distractions. Stealth combat also lacks the finesse you’ve seen in similar games. Covertly changing covers does not always work and the detection meter is not the most precise. Ultimately, there is a good chance your stealth will descend into a firefight. But don’t rule out eliminating as many enemies as possible quietly, because you can become quickly outnumbered and surrounded. Stealth takedowns and takedowns, in general, are satisfyingly violent. Fatal takedowns are optional, although this is a menu setting and not easy to switch on the fly. Brutal takedowns, which tend to be very loud for those stealth fans out there, are particularly fun as Lincoln delivers devastating violence 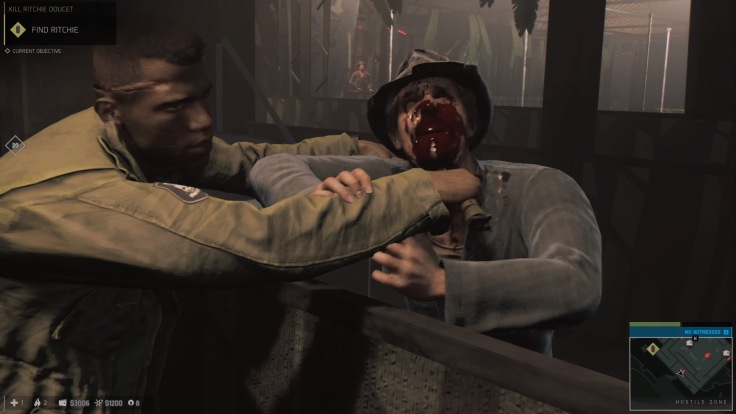 Mafia 3 falls short in the same areas its predecessors did. It offers players a massive open world to drive and explore, but does not offer them a lot to do with it. Buildings and business stand more as locations for missions but feels like a big empty place if you are just exploring. The breaking down rackets formula can feel a little repetitive. Riding around and killing key NPCs is pretty much the only way Lincoln takes over the city. It’s a complex mechanic that works well, but you may feel like you are repeating yourself even as the details of each group or objective change  This is not an uncommon problem with open world games but it won’t affect you too much as long as you enjoy the visceral violence of the combat system and story.

Mafia 3 mostly plays well and New Bordeaux looks great a lot of the time. Unfortunately, the developers at Hanger 13 Games weren’t able to address all the issues. There have been a range of glitches from minor visual oddities to missing missions. The latter was usually fixed by resetting the waypoint in the menu. There are certainly more errors than you’d expect from a big title like this. Some are more annoying than others, but none of these have made the game unplayable. However, it should not fall on players to find workarounds in a glitchy menu system. Hanger 13 reports they are working to resolve these problems on all systems.

The audio in Mafia is excellent and the voice work is well done. Every character has a unique voice both in terms of dialog and delivery. There are a lot of small details that really make the difference and overshadow the occasional glitches. The sound of alligators, the parking brake pulled when you get out of the car, the different sounds you make on different surfaces, you can tell a lot of thought has been put into sound.

While uninspired, the combat systems can still be fun and offer some satisfyingly visceral encounters. The game’s larger mechanic of managing your resources and allies is really interesting, and it further grounds the story by forcing the player to make decisions about how to run their new criminal empire. But you can’t have it all. Mafia 3 does suffer from widespread visual and structural glitches. While most do not inhibit gameplay, it is disappointing to find enemies getting stuck in walls, or the sky looking like someone went overboard with photoshop’s dodge tool.

Mafia 3 shines in its story.  The complex story and interesting characters will keep you invested and eager to complete even the most menial of tasks just to find out more about them. Hanger 13 takes the generic revenge story and manages to develop an immersive narrative. Unfortunately, they fail to elevate the game’s combat system in quite the same manner. Ultimately, the story keeps you moving through Mafia 3.

Mafia 3 is available now for PC, PS4, and Xbox