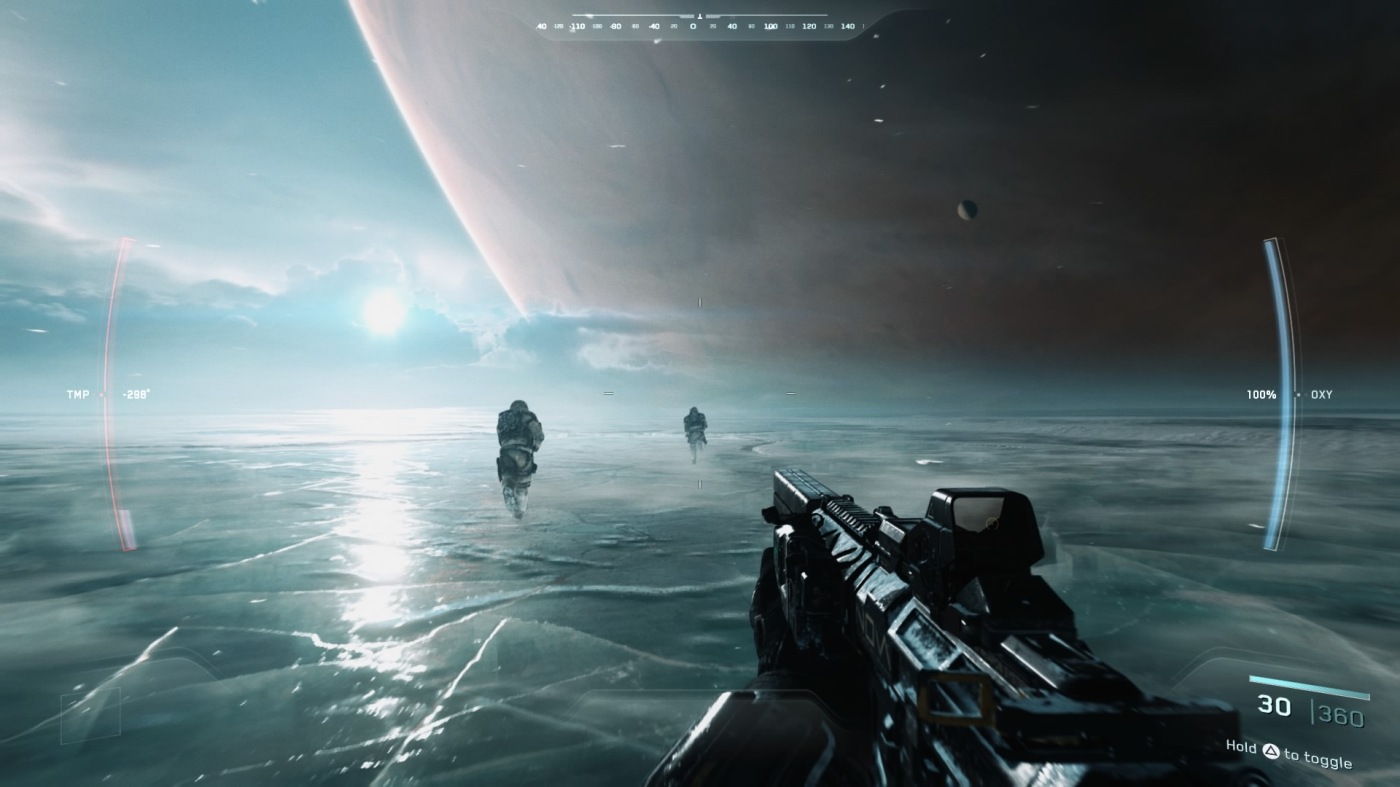 Call of Duty: Infinite Warfare still has a solid Call of Duty core, although it feels like they are going through the motions a bit in favour of conflating the experience with a new space-age backdrop.

Following the franchise’s momentum into more and more experimental military tech, Infinite Warfare takes players into space. It’s pretty much the same as regular warfare, except less gravity. Trying to take the series in a new direction, Infinity Ward is placing players in the boots of an aircraft carrier captain with the illusion of control, giving them dogfight combat.

They never manage to deliver a full experience for any of it, opting for flashy style over substance. Under the glossy space backdrop, this is still Call of Duty. The online is as fluid and engaging as ever and players are getting new gadgets, expanded customization, and a rewards system that will please players of all skill levels and play styles.

Heavy is the head that wears the crown, or the captain’s rank in this case. Infinity Ward’s newest Call of Duty instalment wants to drive home the dreadful responsibility of leading people into battle. Not a terrible theme, but it’s delivered with so little subtlety that you can’t help but laugh. The impact is made particularly meaningless because you have no choice in the matter (despite the developers’ attempt to create the illusion of player control).

Set not only in a future where we have colonized Mars, but also managed to start a war with it. It appears that the war was long before the game’s story, but Infinity Ward fails to provide any solid backstory on either faction or your crew. This undermines ALL impactful moments.

Don’t be surprised if parts of the plot or design remind you of Killzone. There is definitely a lot of overlap between the ultra-militaristic Settlement Defence Front and the Helghast as the game quickly establishes the antagonists as the absolute worst. The SDF rack up a litany of war crimes in the opening act to make sure you know these guys are as bad as Zakhaev, Makarov, or Shepard, because we have no other context for this conflict or what Kit Harington’s problem is (not that it really even matters in the end).

These guys are only a pair of glowing red eyes from being in an entirely different game.

What bugs me is that the writers clearly had a plan for depth. The most impactful moment in the entire game comes during the credits, where the player is given the chance to read the “letters from the fallen” your crew had prepared. It is the first time you are given any context to the lives of these people outside of their gung-ho soldier attitudes. These letters addressed to their families are heartfelt and, for the first time, makes you actually care about the team you wrote off one by one.

Infinite Warfare’s climax seems like it would have been better suited as the finale of a trilogy rather than the beginning of one. I may have cared from the beginning had I spent three games figuring out these people were actually really great. Instead, I had to ride along and never understand my character’s reluctance to be the captain of a goddamned space carrier, laughing when it went to hell time and time again.

The basic gameplay of Call of Duty has not changed. In the campaign, as well as online, players are charged with eliminating enemies with an array of guns and gadgets. During the campaign, there are three types of gameplay. The first is classic “boots on the ground” fighting. These story missions are just progressing to an endpoint while killing everything in your way. Most are uninspired, we have seen more creative level design from just about every Call of Duty that precedes this title.

Infinity Ward saves it creative efforts for the new kinds of gameplay. While these experimental levels are fun, I am not sure if they’re the right direction for the series. Players will take control of Jackals, space-worthy fight jets, and participate in space dogfights while destroying enemy assets. After a while, these missions are just much the same map circling. In the end, you’re just pumping bullets into things until they explode. Most of these missions are optional.

The final new development is Zero-G gameplay. What makes it fun is the challenge of no gravity to work with. Managing your altitude with direction and where your gun is pointed, launching yourself between covers, even ending up completely upside down was great. Melee kills in zero-G were particularly satisfying.

Infinite Warfare enemy AI is entirely absent, opting instead for a high volume of enemies for difficult rather than challenging problems. On the bright side, the friendly AI is surprisingly effective at helping you fight through hordes. They even stole a few of my kills.

Sometimes, it feels as though Infinity Ward lost itself a bit with all its new toys. They are trying incredibly hard to make Call of Duty into an open world, giving players choice in what missions to complete, but the missions themselves are as linear as they come. All the side missions and restructuring don’t change the games nature but do create an identity crisis. It was not until the final mission, in the pitifully but expectedly short campaign that the game even felt like a Call of Duty title.

Many of Infinity Ward’s new tricks, as well as a lot of the old ones, transition into multiplayer. Wall running and thruster packs are still present, keeping Call of Duty: Infinite Warfare’s online play fast and dynamic.

Multiplayer remains largely unchanged. Players retain a version of the exosuits from previous titles to give them that needed edge over pesky gravity. Wall running and boost jumping help make multiplayer dynamic and add a verticality to gameplay. This new “combat rig” system also acts as a class selection mechanism, as each rig will give players different advantages similar to specialists in Black Ops III.

You can choose from Warfighter, FTL, Merc, Fighter, Stryker, or Synaptic. Some favour speed, other heavy weapons, other stealth. They all look cool, but your playstyle will determine which rig is best for you at the end of the day.

Weapons, tacticals, and scorestreaks have all been updated to match the space-themed campaign mode. Many are just new versions of things you are already familiar with, but there are some cool new additions. My personal favourite is the Black Hole Projector which sucks your opponents into a crushing vortex. The Anti-Grav grenade is also fun, but skilled players will kill with or without gravity on their side.The arsenal of weapons is extensive and there is something for everyone. It also includes energy weapons like the Volk rifle, which are mostly regular guns with space-age effects.

They have increased the customization of weapons. On top of the classic adding stocks, muzzles, or extended mags, guns can also be crafted. Crafting weapons requires salvage, which is collected by simply playing the game, but allows players to create special variations on basic weapons that add perks to your loadout.

Infinite Warfare has brand new cosmic maps and even a new variation on fan favourite Terminal, which has been given a space makeover. Infinite Warfare features many of the classic modes including Team Deathmatch, Search and Destroy, Hardpoint and Kill Confirmed but they are introducing new modes like team-based Defender or Uplink

Infinity Ward has added one new dimension to multiplayer with team-based challenges. In their words:

“Players choose their team based on what type and caliber of player they are, and what they want to go after and earn. Each team has its own unique personality, challenges, and specific commander that will help guide, and in some cases, push the player to go after the objective and complete those challenges.”

I know what you’re thinking and I agree, Pokémon Go has gone too far. These team specific challenges are not required but can gain player bonus XP and unlockables.

What do you get when you take 80s nostalgia, theme park rides, and space and put them in a blender with zombies? Zombies in Spaceland, obviously! In possibly their best call in game development, Infinity Ward decided to lean hard on the campiness of zombie horror and outlandishness that future weapons can provide and produced and spectacularly fun version of Call of Duty Zombies. It is also the game component that most deviates from the classic formula but entirely to your benefit.

Call of Duty: Infinite Warfare looks good for a modern game but will not blow you away if you already played Battlefield 1. The game looks beautiful overall, but up-close textures lose detail quickly. Although there are a few environments and set-piece moments that stand out, Infinite Warfare is dark and almost everything has that space-age sheen. Quite frankly, there is only so much steely metal a person can stand.

As it stands on my PS4, Infinite Warfare requires 55 gigs. You will need over 100 gigs if you plan on enjoying Modern Warfare Remastered as well.

If you bought it for your console, the game runs with little to no problems as of the day one patch. Poor enemy AI was the most significant issue, but I am not sure it is a glitch. Actually, that may be worse. I observed enemies remaining neutral until I engaged them. Overall, the title performed as expected.

The soundtrack to Infinite Warfare is full of your typical shooter fare, tense moving to triumphant to spur the hero on. It can get lost in the chaos of war now and then, but it is solid. The same can be said of the voice work. The cast does a great job bringing the team to life, although Kit Harington was definitely wasted here. He did a convincing job as Rear Admiral Salen Kotch, almost annoyingly so because sometimes I wished I could just shut him and his “you’ll die under our boots” rhetoric off. The character is so two-dimensional that even the game gets bored with him.

The sound effects and foley work was good as well, except for one unforgivable place: the guns. Yes, they are using futuristic weapons, but I was disappointed with how little they sounded like guns. They lacked distinctive sounds and generally fell flat.

At its core, Call of Duty is still that war based first person shooter. They added bells and whistles over the years like exo-suits and speculative weapons and tech, but it’s still about moving from point A to point B and putting bullets into hostiles at the end of the day. Some say it’s repetitive, but Call of Duty. Infinite Warfare suffers somewhat of an identity crisis. It wants to be Call of Duty, but it also wants to be something else. The trouble is that they couldn’t quite decide what.

The story lacks effective backstory to get players invested, and that’s particularly evident when it is packaged next to a remastered Modern Warfare. We don’t buy Call of Duty for the writing, but that is no excuse to put together something so clearly lazy. The game still shines where it should though: Online.

Infinity Ward has done a great job with Online. Although most changes are largely cosmetic, it has made some great additions. The title remains accessible for both hardcore and casual players. Systems like crafting weapons encourage dedicated play but do not dissuade players who may not have the time or skill level of a 12-year old that prestiged three times already. Players have a lot of options to manipulate and fine-tune their loadout to make the experience as personal as possible.