There are plenty of ways to hack the city of San Francisco in Watch Dogs 2 but here are some tips to help you do it better. Our tips for getting around, planning your missions, retrieving key data, and taking down Blume.

Watch Dogs 2 lets players lose in the sprawling open world of a digital San Francisco. There is so much to do and see it may seem a little overwhelming at first. The hacktivist group Dedsec needs your help to take down Blume but in order to do that, you need to get your follower count up. The exploits of Dedsec will help make you internet famous or infamous but completing them is more than just simply shooting your way to a checkpoint. Ubisoft’s San Francisco is a network of puzzles that will require some out of the box thinking to solve without being shot to pieces by the private security, gangs or even police.

Here are some tips to help you hack San Francisco.

Watch Dogs has completely overhauled their vehicle controls with help from the Driver Franchise team. Unfortunately not everything “completely overhauled” turns out better. Indeed while every vehicle type in watch dogs has its own unique feel most don’t feel all that fun.

Trucks are study but not flashy, most of the sedans are underpowered. Of course, there are the sports cars, they look flashy and go fast but it is very easy to lose control of them.  No, Motorcycles are your best bet. By far the best vehicle control in the game and you can hop on one and ride off without anyone being alerted. Which is handy if you have not unlocked the Vehicle hack skill. Cruising around on your new hog is the best way to explore San Francisco

They are quick, maneuverable, and the easiest to steal.  You can find them on just about every block, indeed in the world of Watch Dogs 2 motorcycles are almost as popular as real cars. Perhaps because the real cars all handle terribly.

Watch Dogs 2 has a fast travel system to help you get around the massive map but now you have your transportation sorted out riding isn’t so bad. You will want to drive around for a few reasons. The most obvious is that this is a beautiful world that Ubisoft has built for you. While not exact, there are a lot of things included from tourist attractions to oddities that make it a rather faithful reproduction of the Californian city.

The less obvious reason is that there is money to be made! Rolling through the streets will reveal the locations of new research points and perhaps even better stone cold CASH. Yes, some fools have been leaving bags of cash lying around, not small amounts either the bags can net you between 5 and 20 thousand dollars. Collecting them is a much faster method for saving up for new toys than hacking strangers.  Yes, you can make money that way too but usually less than $100 a person, it is a terribly slow way to get rich.

Another tip on exploring, every time you steal a car and some of the time when you pick up bags of cash you will also find electronics. A Nudle microcomputer or smartwatch. If you are wondering where all these items are for the answer is extra cash. Visit a pawn shop, the icon that looks like a diamond ring, and turn the items over for cash. You can also buy ammo for your weapons there. You’ll need all that cash too.

Ubisoft has given players all new tools for hacking their way around the city. Aside from the expanded hacking abilities within Marcus’s phone the game has two remote vehicles that are essential to your success.

The first is the RC Jumper. This little guy is super handy. He fits through small openings such as holes in fences or vents and he hacks almost anything. In fact, the jumper can do just about anything Marcus can including hacking Blume cTOS panels and picking up collectibles. Upgrade his super jump as soon as you can and there will be few areas he can’t get into.

The other is the quadcopter. Pro Tip here: unlock this as soon as possible. Go out and find the small cash reserves that are stashed in various locations and unlock it. It costs about $65,000 but it is the best thing you can unlock in the 3D printer. Now your quadcopter cannot pick up things like the little jumper but it can give you great aerial views and visual access you can’t always get on the ground.

Hacking in Watch Dogs is all about line of sight so getting a better angle on something is valuable. The quadcopter can be used to solve massive puzzles and reach hack out of the way research points. It is also useful in the PvP hacking mode as you can begin your download from a much safer position. If you use these guys in tandem, they become an effective team. You can switch between them quickly and chances are between the two of them Marcus need never step into hostile territory 80% of the time.

The world of Watch Dogs 2 turns the cityscape into a large puzzle. You will often find to find your way to your objective or through obstacles, you may need to take a big step back. If you need to access something that is in a hard to reach spot send up your quadcopter. Just take it for a spin around the area, chances are the starting point is actually down the block from the objective marker. 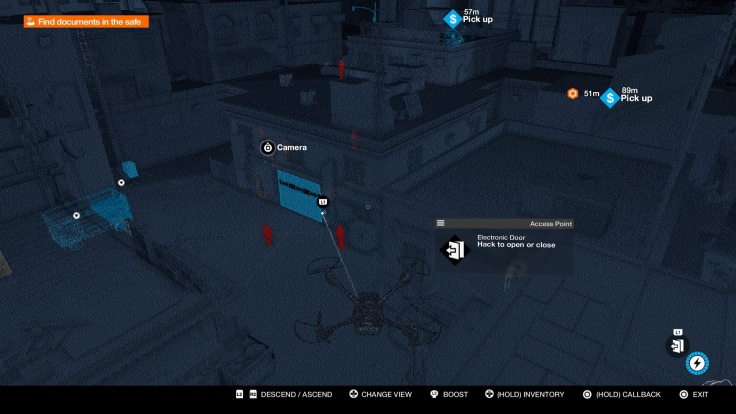 5. It’s Your City, They Just Patrol In It

Truth be told young hacker vigilante Marcus Holloway is great with code, not bad with a billiard ball on a bungee cord, but terrible in a firefight. There is not much that can be done about it either because Watch Dogs 2 has limited options for upgrading health or armor and a comparably small arsenal. Yes, you can print some nice guns over at the Dedsec 3D printer but this game isn’t really about that.

No, you will fair much better sending your robotic army to do your bidding but sometimes they are not enough. In this case, the stealthy approach is best using cover and hacking your environment to give you the upper hand.

6. Hey, Look Over There! Distract the Problem

When you absolutely need to get Marcus into enemy territory then the easiest way is just to draw attention away from where you need to be. Your Jumper can be outfitted with a taunt function which helps distract enemies. Keep in mind he cannot take much damage before going to pieces but he can draw attention for long enough for you to slip into a new area.

Random electrical panels can also be hacked to send out voices that will alert nearby guards. Those same panels can conveniently also be rigged to zap them into a short nap. Be careful, the automated discharge usually only takes out one guard based on how they approach and will panic the others into a search pattern if they see it happen.

Enemy personal devices such as their phones and radios can be hacked to distract them. It only lasts a couple of seconds but it completely breaks their line of site. You can use that time to maneuver your jumper or move Marcus in for a melee takedown without alerting other enemies.

7. Pick Up The Essentials

The map in Watch Dogs 2 is completely open from the moment you start the game. That means from the very first moment you can travel anywhere in the world. Swing by the Dedsec HQ first and pick up your Jumper and grab the quadcopter as soon as possible. Once you have that pair there is little holding you back from going anywhere. 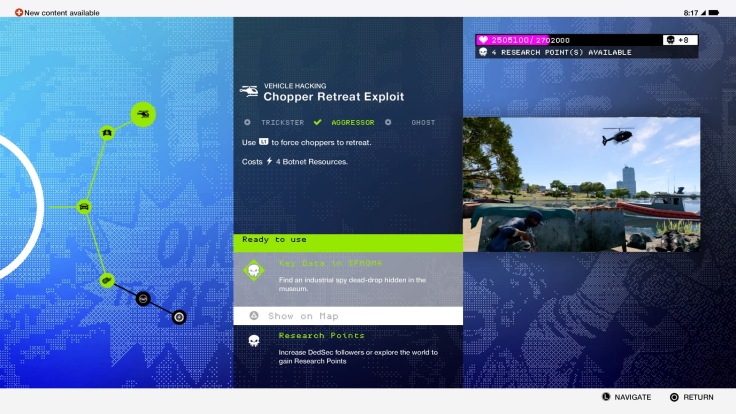 Take a moment to look at your Research app and review the seven different skill trees. You may notice that beyond the first couple of unlocks in each tree you will require “Key Data” as well as research points to unlock a particular upgrade. Research points are picked up two ways. Either by completing missions and gaining followers or by finding research nodes in the environment and hacking them. Research Key Data are very specific collectible briefcases that have been left around the city in what are generally poorly secured places.

The great thing is that Watch Dogs 2 tells you exactly where you need to go to get them. So if you want the Chopper Retreat Exploit as soon as possible you will have to have enough points AND find the Key Data somewhere around SFMOMA. Once you are in the right area send you quadcopter up to survey it and it won’t be long before you spot the research you are looking for. If you pick these cases up early when you have the points you need to unlock new upgrades you will be ready to go.

How much of San Francisco have you hacked? Do you have any tips for taking down Blume?